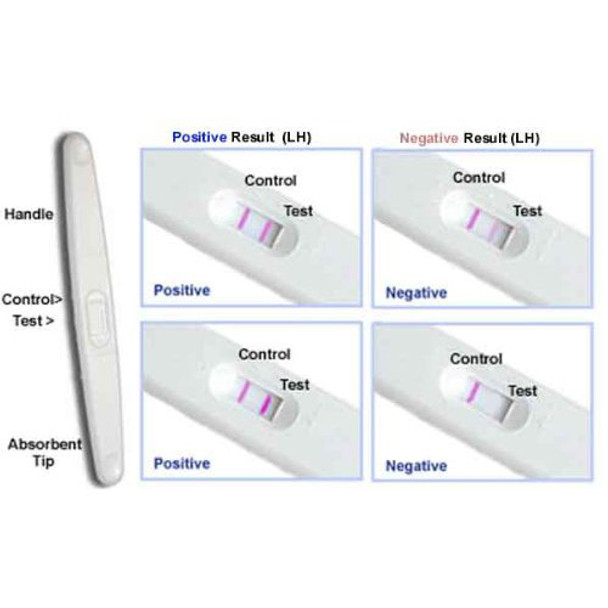 An egg can only live for 24 hours or less after it is released, while sperm survives only a few days in your body. Using our Midstream Ovulation Test helps you predict the two most fertile days following a surge in the luteinizing hormone (hLH) which usually comes before ovulation. Having intercourse within these days will maximize your chances of becoming pregnant.

Each ovulation test is individually sealed in a foil pouch.

When to start testing:

If two colour bands are visible and the test band is of equal or greater colour intensity (darker) than the control band, this is a positive result and a good indication that the L.H. surge is occurring. You should ovulate within the next 24-36 hours. Sexual intercourse on the evening of the first positive test is advised.

If two bands are visible but the test band is of a less intense colour (paler) than the control band or cannot be seen, this means the L.H. level is at or near its normal level and that the surge is not in progress. You should continue with daily testing.

If no control band appears within 5 minutes, the result is invalid and should be ignored. A visible control line is needed in all cases to confirm a proper test result.

All Orders delivered for just €4.99 To anywhere in Ireland and Northern Ireland

Your order will leave our warehouse in Bray, Co Wicklow and be delivered the next working day. You will receive SMS & email tracking updates from An Post and someone will need to sign for the parcel on delivery.

MSRP:
Was: €15.99
Now: €6.99
Ovulation Tests – 10 Tests Detect your ovulation and enhance your ability to conceive with the Ovulation Test Strips. Designed to detect your LH (luteinising hormone) surge, which highlights your...
Add to Cart

MSRP:
Was: €10.50
Now: €9.99
Product Overview  The Babystart® Ovulation Test is a simple highly accurate  screening test. Designed to detect increases in the LH  in a woman’s urine – an increase in this...
Add to Cart

MSRP:
Was: €15.99
Now: €6.99
Ovulation Tests – 10 Tests Detect your ovulation and enhance your ability to conceive with the Ovulation Test Strips. Designed to detect your LH (luteinising hormone) surge, which highlights...
Add to Cart

MSRP:
Was: €21.99
Now: €17.99
Conceive Plus® has been designed especially for couples who want to get pregnant naturally. Conceive Plus® is an exclusive patented fertility lubricant clinically proven to enhance sperm...

MSRP:
Was: €26.99
Now: €18.99
Clearblue Digital Pregnancy Test - 2 Tests Delivering 99% accuracy from the day your period is due and a sensitivity so precise that it can detect your pregnancy 4 days early, the Clearblue Digital...
Add to Cart

Sign up to our newsletter and receive exclusive discounts and deals